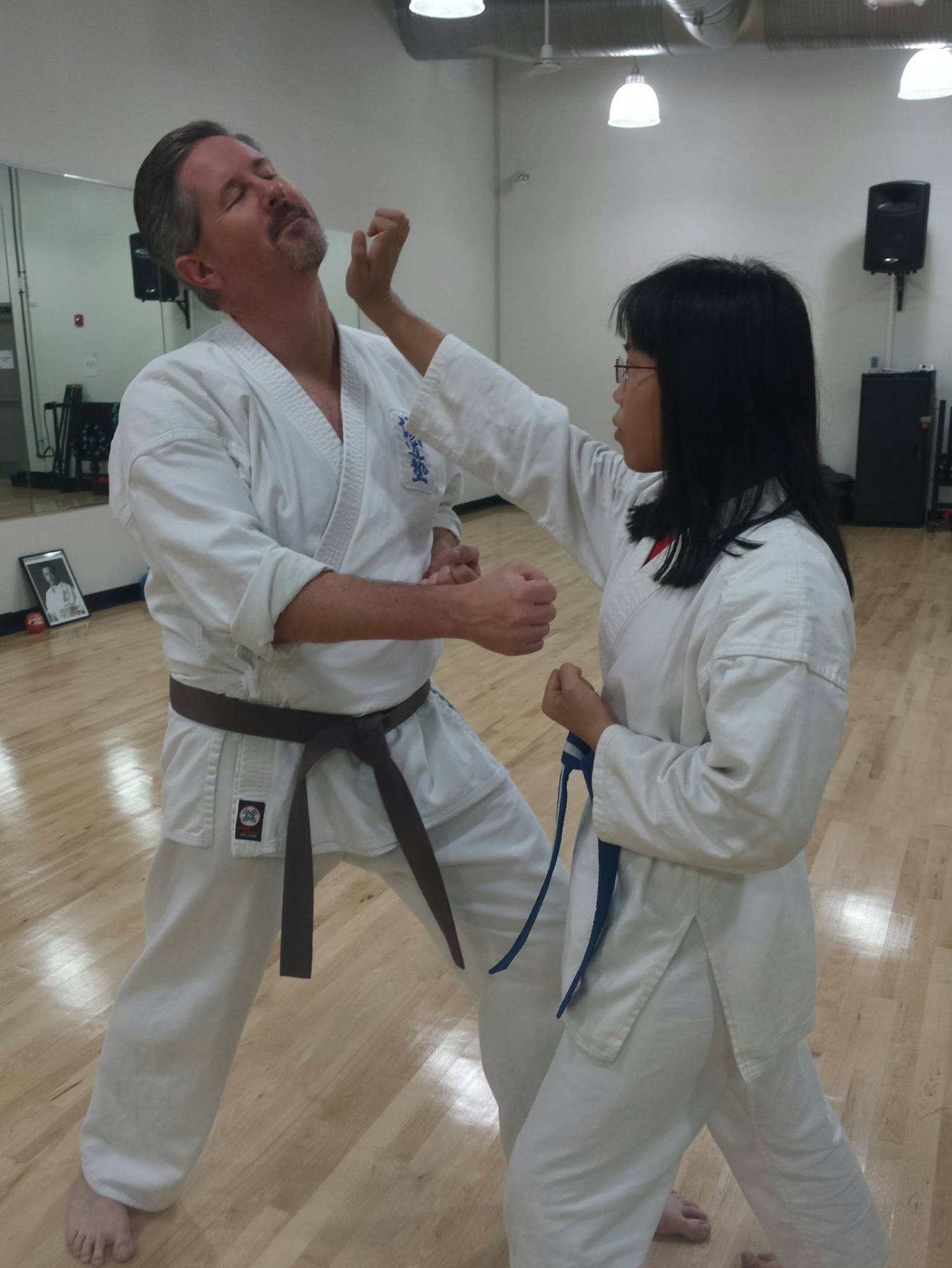 Rather than allowing him to push me aside, I stepped my right leg behind his, and he went back over my hip. Drunk people don't have good balance, so he went down hard -- I grabbed his shirtfront on the way so he wouldn't bounce his head on the floor.

I said something like "You're *done*. Stop it.", let him go, stood up and stepped back, maintaining my guard.

He seemed a bit stunned to suddenly find himself on the floor. As his brain caught up with events, his anger and aggression turned from Smart Guy to me. Which was sort of the point.; I enter into a situation like this on the assumption that I have the skills to handle being the target of aggression better than the original target could.

He staggered to his feet, cursing. "Way to get me from behind, asshole!" He didn't quite understand what had happened, that I had been in front of him before he tried to push past me -- his brain had been fixated on Smart Guy and hadn't registered me. "Asshole! Pussy!"

He wanted a fight. I don't know why, and it's sad to think that he was in a place where getting into a fight seemed the best thing to do that evening. But with Smart Guy gone, I was the most obvious opponent for some fisticuffs.

Someone looking for a fight like that won't get what they want just by jumping into an assault. They have to be able to convince themselves that they are the aggrieved party. that the person they are punching "deserved it" somehow. He had to goad me into at least insulting him back, into making some sort of display.

But I knew how this game worked, and didn't want to play.

I realized that no matter what he said, it didn't have an effect on me. More, everyone watching knew who was acting like an asshole here, and it wasn't me.

Years later I read a Buddhist teaching that put this moment in perspective. Someone insulted theo Buddha, and the Buddha asked him, "If you give someone a gift, and they don't accept it, to whom does the gift belong?"

"It belongs to me. It stays the property of the giver," the man answered.

"Just so, I don't accept your insults. They belong to you," said the Buddha. Burn. Or to put it another way: "I'm rubber, you're glue. What you say bounces off of me and sticks to you."

To be honest it also helped that I'd already taken him down once, so I wasn't experiencing much fear about the situation. It would have been harder to deal with this calmly if he'd been thirty pounds bigger, or demonstrated some prowess.

So I replied, "Sorry. Yep, guess I'm an asshole all right."

This confused him. I wasn't playing the game, wasn't following the script. "Pussy! Asshole!" He gave me my cue again.

"No, you're not." I did shift my weight a little and think about which way I'd move if he charged as his words got more aggressive, but I didn't rise to it.

All this had taken just a minute or two, and the bartender had alerted the manager, who lived upstairs. He ran down, confronted Dumb Guy, told him to get out. It was now two to one against him, and after a little more bluster he left.

He got kicked out, I got a free beer.

Dumb Guy did not attack my body. But he did attack my social "self", my reputation, my status, my social standing -- my ego. Very often people confuse this ego with their self, and think that when they engage in violence to protect their reputation they are somehow engaging in self-defense.

In this case the attack on my status was completely ineffective, but the same idea would apply if a bunch of people in the bar had agreed with him: their opinions wouldn't change who I really am.

(Now, as I write about this years later it strikes me that there's another danger. In telling this story I'm casting myself as the hero, who stepped up and faced danger and kept cool under pressure, a real enlightened guy. That can be big bit of ego-feeding. It's tricky sometimes to talk about our best moments because we want to put them out there as an example to our future self and to others, but if we get attached to the idea "I did such a great thing once!" we won't be able to act in the moment the next time.)

There is a famous Zen story about an early master named Tokusan. Like all of these stories, it doesn't have to have actually happened to reveal a truth; and this was in China so actually would be Ch'an but I use "Zen" in the general sense here.

Tokusan originally followed a different form of Buddhism and was an expert on the Diamond Sutra. He carried his copy of it around everywhere (this is around 800 CE or so, so having your own copy of a book is kind of a big deal), had a big collection of notes about it, and he was incensed to hear about a school that talked about a transmission outside of the scriptures he valued so highly. So he headed south to find the Zen devils and stamp out their heresy.

When he was getting near the end of his journey he stopped at a tea shop to refresh himself and have a little snack. Now, the work for "snack" in Chinese (or at least, the word for this sort of snack at that time) literally means "light up the mind" or "refresh the mind".

This is a basic Buddhist idea. Your past and your future aren't this present moment, and the "present" is continually in flux -- by the time you say "present moment", it's not anymore. These are all mental constructs, not reality.

"So tell me please, sir," the old woman asked, "which mind are you going to light up with your snack?"

Her stumper got Tokusan thinking that just maybe this Zen stuff did have something to it after all. Since this is a Zen story, you can guess that in the end he became not just a convert to the heretical school but one of its great masters.

I think of a variant of the "which mind" question when I think of self-defense. The "self" is an illusion. We define our social self relative to other people, but that's not real, that's just what other people think. We define ourself by our thoughts, but our thoughts change constantly, there's no separate and stable "self" there.