run away -- and get help

When I teach self-defense (as opposed to traditional karate -- related but distinct ideas), I use the "Five Fingers of Self Defense" model that I learned from Jun Shihan Nancy Lanoue of Thousand Waves: Think, Yell, Run, Fight, Tell. (I've put a bit of my own spin on it, so if I say something dumb on the topic blame me, not Jun Shihan Nancy!)

So what is a kyoshi, anyway? In this case, a lucky, persistent dilettante

I spent last weekend at the Seido Karate Houbu (headquarters dojo) in Manhattan, being tested for the rank of godan, fifth "degree" black belt.

Trouble, it has often been observed, never comes alone; and so to keep an adequate amount of drama in my life, in addition to the stress of preparing for this promotion I've been getting ready for a server migration at my day job. This had me still up fixing a last-minute problem with a Bash script at 12:30am on Friday morning...I ended up getting no sleep before catching the train to New York. Fortunately, however, the portion of the testing on Friday was fairly light. We candidates for promotion took a white belt level class with Nidaime Akira Nakamura (Kaicho Tadashi Nakamura's son and designated successor), and then a meditation class with Kaicho.

the thirty seconds when I knew something about karate

As I try to prepare myself to test for godan (fifth level black belt) in a few weeks, I've been reviewing more than twenty-seven years of training, looking at every drill and technique and asking myself about it.

And what I find is that I don't know much about karate. I look at my jodan uke (upper block, known to some as "age uke", rising block) and wonder if my shoulder positioning is right, if I've been doing it wrong for over a quarter century. I'm not sure which way my hips should move when I turn my body in the most basic kata series, the Taikyoku. I've been working with the bo staff since I got my shodan (first black belt) in 1995; I'm not sure how to hold it.

I can remember a time when I knew a lot about karate. It lasted about thirty seconds...

Our friend Sifu JB Jaeger from the Maryland Jeet Kune Do Athletic Club spotted this great piece from "The Art of Maniless": Don Draper Judo: Unarmed Self-Defense from the Mad Men Era. (Thanks to Google Books, the original Popular Science article can be found here.)

Getting the paperwork together for my godan promotion test, I dug up my Blue Belt promotion certificate from 1986. Who is this kid? And who ever thought anyone would call him "Sensei" some day? The mind boggles. 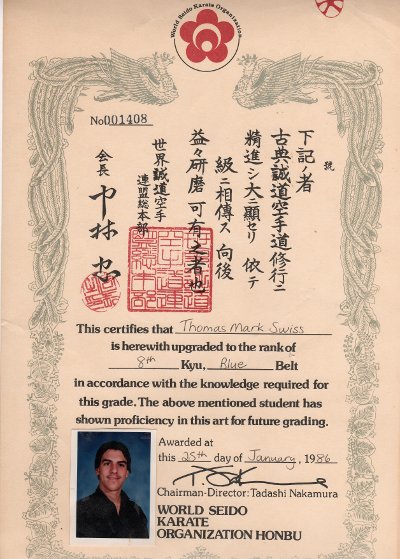 the rewards of teaching kids

Sometimes, teaching karate to kids is a thankless task. You're up in front of a room of bored eight-year-olds, several of whom are there because their pediatrician told their parents that martial arts training is good for their ADHD-diagnosed youngster. (Don't get me started about how much of "ADHD" is a socially created and constructed problem...) You're sure that they're all there because Mom and Dad needed to get rid of them for an hour, that they'd rather be playing at being Power Rangers or Teenage Mutant Ninja Turtles than actually practicing kata. You wonder if you're wasting your time.

And then...one of them goes and immortalizes you in art. And you think, maybe this does matter after all. (Click on the thumbnail for a bigger view in a new window or tab.)

Out of the blue, one of my young students gave me this drawing yesterday. (It's not the first drawing I've been given by a young karateka, but it is the first from one of my own students.) Let me tell you, I've got a big fancy certificate for my yondan ranking, signed by a martial arts living legend, Kaicho Tadashi Nakamura. But Kaicho Nakamura has given out hundreds -- thousands, I guess, over 36 years -- of dan certificates. This young student is probably only going to give a drawing to one karate teacher.

This one will be framed in a place of honor.

(Note the attention to detail -- he's got a brace on my right ankle. And I love how I'm depicted as kicking, punching, and laughing at the same time. Ha ha!)

self-defense advice from The Most Interesting Man in the World

Some good advice on self-defense from The Most Interesting Man in the World. (And since "He's a lover, not a fighter; but he's also a fighter, so don't get any ideas," what better source?)

This actually fits quite well with the approach I use in teaching self-defense. The "Five Fingers of Self-Defense" is a system I learned from Jun Shihan Nancy Lanoue of Thousand Waves Seido Karate in Chicago. Jun Shihan Lanoue may explain them a little differently, but this is my take on the Five Fingers:

training around an injury

Tomorrow is the 36th Anniversary Tournament for Seido Karate. I won't be competing this year because of an injury: last fall I injured my ankle, what I took to be a simple sprain, but it still hasn't resolved. (I am finally going to get it evaluated by an orthopedic specialist.) But I'll still be doing my part at the tournament as a judge.

Last Sunday I got to meet up with my good friend and karate colleague Mike Gurklis. The occasion was the Street Beat Festival in Federal Hill, Mike's old neighborhood. One of our favorite bands was playing, so Mike brought his family down and we got a change to hang out, and then go get sushi.

As we walked around the festival, browsing the vendors and catching up, Mike told me how back when we were mudansha (students below black belt rank) together he had run into our sensei, Neal Pendleton, at this same festival. It was the first time he'd encountered one of our instructors outside a dojo event -- not being Sensei Neal but just a guy hanging out having a beer.