We've been spared the worst of the crazy winter weather here in Baltimore, just enough to be interesting. Last night we had an ice storm, coating the sidewalks and the trees. The roads were mostly clear, though. It made my run this morning quite interesting, I stayed on the streets rather than my usual run down the "trolley trail" through the woods. 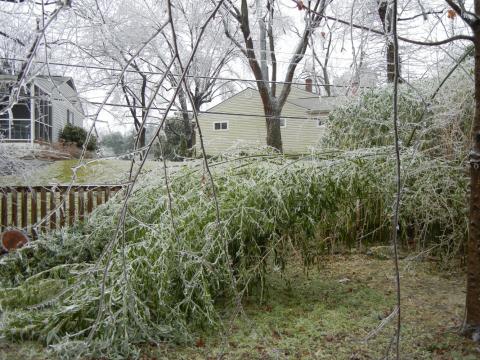 While I was out I came across one area where a tree, weighed down by ice, had fallen and taken down some overhead wires. (I don't know if the downed wires were power, cable TV, or phone, and I didn't get close enough to investigate.) And on the return lap, I heard a loud crack! and turned in time to see a large branch of a fir tree break away and fall, fortunately just onto lower branches and not on anyone or a house or car.

Meanwhile, in my backyard, while the trees stand tall but brittle, perhaps near the breaking point (and leaving me glad that BGE's contractors found that the huge locust tree was rotten and took it down), the bamboo bends all the way down to the ground under the weight of the ice.

Bamboo is a tremendously hard and strong material. (After the flood two years back, my downstairs floors are now bamboo, and some bamboo flooring can be harder than oak -- though comparisons are complicated.) Yet the response of the plant to being weighted down is not to stand strong and immobile, but to bend.

There is a martial arts proverb: setsu do motsu, 節度持. It's often translated in context as "be strong but know when to bend" or "flexibility and discipline". But if we look at it more literally, "setsu" means a knot or node or joint, and it refers to the "knots" between the segments of bamboo. Indeed, the kanji's radical, the part at the top, represents two stalks of bamboo.

"Do" can mean "degree", as in measurement. "Motsu" means to hold or to have. We might say that the phrase literally refers to measuring out the right proportion of "knots", or firm points. A bamboo stalk has strength because of its joints, its setsu. But if it has too many, if it tries to be too strong, it is not much different than the tree that breaks under the weight of the ice rather than bending.

We often talk about Zen in the martial arts. For historical reasons, in Japan Zen and budo influenced each other quite a bit, so that not only can we find Zen in the martial arts but Japanese Zen has on its surface a bit of a harder, more military edge to it than Chinese Ch'an. (Especially Rinzai but I believe this is true of Soto to some degree also, though I'll leave it open for scholars of Buddhism to correct me on this.)

It's important to trace Zen back and see how it has Taoist as well as Buddhist roots. And flexibility and yielding are key concepts of Taoism: "Yielding is the way of the Tao," as Stephen Mitchell translates one passage of the Tao Te Ching. As karateka we strive to be strong and disciplined, and there is a place for this. But yielding is also a form of discipline. And this has a bearing both on our technique and our training.

One of our ancestral styles is "Goju Ryu", the "hard-soft school": the "ju" here, 柔, is the same as in judo. Rather than seeking to overcome an opponent by overpowering them, sometimes we can yield and redirect -- bend as the bamboo does.

But on a deeper level, our training must balance strength and discipline with yielding. It's not uncommon for a strong student to over-train, to injure themselves or burn out their enthusiasm. Of course lacking discipline is no good either. We have to measure out and hold on to the right degree of setsu.

(FightingArts.com has a transcript of a talk that Kaicho Nakamura gave on the topic of Setsu Do Motsu some years ago, I recommend reading it.)